Meatloaf is one of those under-estimated, all-American type dishes that we don’t often pay that much attention to. But the reality is that it has a long history dating back to the Romans.  Maybe we should appreciate the lowly meatloaf more!

Meatloaf has a long and ancient history

Patties or “loaves” of minced meat, mixed with a variety of ingredients, are part of many culinary histories. Germans hid boiled eggs inside meatloaf, the Romans enjoyed theirs made with wine-soaked bread, spices, and pinenuts,  Medieval Europe served it mixed with with fruit, nuts and seasonings. Sometimes it was served hot, or wrapped in ham, or served cold with sauces, or was found jiggling in layers of gelatin. From the beginning, meatloaf showed us how much potential we have for the re-invention of food.
Modern meatloaf followed the invention of the meat grinder
Before the meat grinder, meat had to be laboriously minced by hand. The meat grinder changed all of that, making the process much quicker. It may be rare to own now, but a meat grinder used to be a normal kitchen tool, ensuring that everyone could grind his or her own meat. And what better use for ground beef than meatloaf? Meatloaf became much more popular after this important culinary invention.
Meatloaf was comforting during the Great Depression
The Great Depression was hard on the majority of Americans, with millions out of work, the stock market crash, and the Dust Bowl. With meatloaf’s ability to stretch cheap meat into even more meals by the addition of cheap oats, breadcrumbs, and other starches, it’s no wonder this filling dish gained even more appreciation in the hearts of Americans during this time frame.

Photo: Seattle Municipal Archives/flickr
Meatloaf was popular during World War II
For many of the same reasons, meatloaf grew in popularity during World War II as well. A version by “Penny Prudence” was promoted with the name of “Vitality Loaf” during this time frame. It was formulated for getting as much nutrition as possible on the dinner table for a low cost. Vegetarian options also started circulated as rations cut down on the availability of meat. The picture above was likely part of the “Health for Victory” campaign, focused on helping war time families get through the war with good nutrition despite shortages of staples such as meat. Meat-stretching recipes like meatloaf were an obvious choice. With mothers working outside the home at higher rates, I’m sure ease of preparation was also a reason for its popularity.
Meatloaf is incredibly adaptable
Many home cooking-style restaurants serve classic meatloaf, with diners appreciating the meatloaf that has survived through all of this history. For some, it speaks of a mother’s love. But since meatloaf takes on variations so easily, the fine dining scene also features it with rich and exotic ingredients, showing that it dresses up just as well as it dresses down. And there are plenty of recipes for making it at home that use more specialty items like mushrooms, wines, special spices, unusual meats, and more. You can keep it as plain and simple, or as fancy as you like.
The reason meatloaf has stayed with us through so many generations? It’s a master of evolution. It’s lived through ancient times, the Industrial Revolution, world wars, heart breaking depressions, nasty processed foods, and fancy gourmet versions, all because it is so adaptable. With such skills, it’s sure to outlast us, as each generations makes it their own. 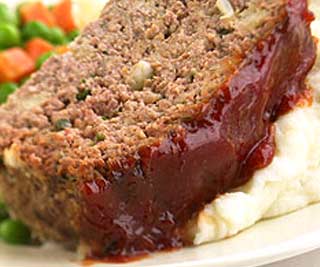 Meatloaf, mashed potatoes, buttered corn and rolls….My favorite meal growing up. All those carbs!!. But back in my growing up days (the 60’s) you went outside and played, came in for a bite of lunch, then back out until mom called us in for dinner. In the summertime, back out to play until it started getting dark. Burning up carbs in those days was not a problem!! This meatloaf is simple and delicious.  My mom’s tried and true recipe for over 50 years.  Don’t forget the cold meatloaf sandwich with soft white bread and a blob of mayanaise!!